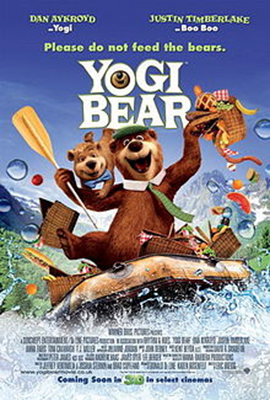 Yogi (voiced by Dan Aykroyd) and Boo Boo (voiced by Justin Timberlake) are two brown bears who have a penchant for stealing picnic baskets from visitors to Jellystone Park, while park rangers Smith (Tom Cavanaugh) and Jones (T. J. Miller) try to prevent them from doing so. Meanwhile, Mayor Brown (Andrew Daly) realizes that his city is facing bankruptcy due to profligate spending on his part. To solve it and fund his election campaign to be the next state governor, the mayor decides to "find some place losing money so he can earn it," and he picks Jellystone, the park where the bears live. The park is selected as a logging site, and Jellystone is shut down. Now seeing that their home is in danger of being destroyed, Yogi and Boo Boo team up with Ranger Smith and a documentary-shooter named Rachel (Anna Faris) to save the park.

Funny… full of slapstick comedy! Especially the 2 cutie bears! So realistic, could have hugged and cuddled them! Story wise, it’s the usual movie with moral kind for kids and entertaining for adults. A good movie to watch with the family while spending quality time together.