MPOV: The Smurfs in 3D

We were contemplating either the blues or the barbarians. Finally the blues won ^.* 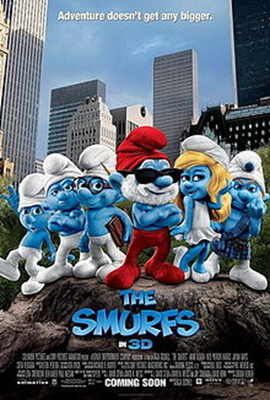 The Smurfs were busy preparing for the Blue Moon Festival when Papa Smurf saw a vision of what was to happen next. He instructed Clumsy to avoid collecting Smurf roots due to this vision but Clumsy went ahead anyway. On the other side, Gargamel, the evil wizard, was busy searching for the Smurfs, for their hidden village. He accidentally stumbled upon Clumsy collecting Smurf roots which led him directly to the invisible village! All hell breaks loose as all the Smurfs were running away from Gargamel! Clumsy accidentally followed the wrong route and stumbled upon the Forbidden Cave which led to a gigantic vortex! Papa, Smurfette, Grouchy, Brainy and Gutsy had followed Clumsy, hoping to save him but they got sucked into the vortex instead as Gargamel was about to catch them. Lo and behold, they ended up in the big apple, New York City!

It was a smurftertaining movie albeit a simple and predictable storyline. It was smurfiliciously funny, a movie worth watching with your kids and family. Not necessarily in 3D as it was blurry at some points, not sure if it’s due to the poor quality 3D glasses or the movie itself. CGI for this was really good, I do wish I have Smurfette as my girlfriend ^.^ One thing for sure, this definitely stayed glued in the mind ‘la la la lalalala la la la lalala la’