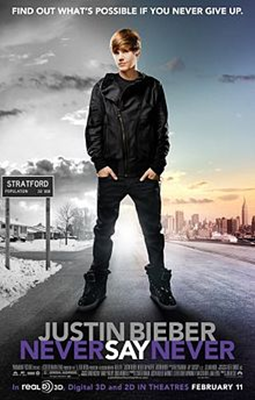 The film follows the pop star Justin Bieber during 10 days counting down to what is considered his most prestigious performance, that of August 31, 2010 in Madison Square Garden, sold out in 22 minutes. It shows footage of the performances during this period from his My World Tour. It shows excited female fans (mostly young), and several instances of the "One Less Lonely Girl" routine of inviting a girl on stage to be the object of his affection, and of surprising random girls with free tickets to his concerts. The main people around Bieber, being like family and good friends to him, are interviewed, but Bieber himself is not. Various instances of praying together before a show are shown.

Ok, those who knows me knew that I am NEVER a Belieber fan (Did I spell it right?) You will not catch me owning a CD nor anything related to JB. Unfortunately, I had to watch this documentary movie as Hubby wanted to >.< Well, what can I say so as not to offend JB fans? Hmmm… they have captured all the good side of him, of course, since it’s his production. It is a good ethical movie as it will motivate the young fans to achieve their dreams, also to pray always and respect the elders. In the end, JB did gained my respect, if everything captured in the movie is true. It has also motivated me to try achieving my dream. However, I am still NOT a fan.