MPOV: From Prada to nada 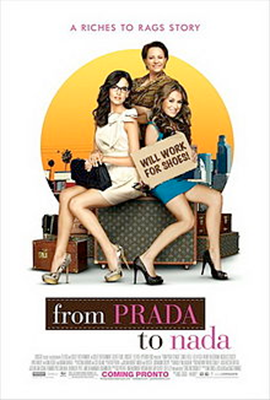 Sisters Nora (Camilla Belle) and Mary (Alexa Vega) from Beverly Hills learn how the other side lives after their father dies unexpectedly and they are taken in by their estranged aunt in East L.A.
Nora and Mary grew up in a sprawling mansion, so far removed from their Mexican roots that Mary refuses to even acknowledge their heritage. Then in a flash, their father is gone and they are both left penniless. Fortunately, the girls have a kind-hearted aunt Aurelia (Adriana Barraza) to fall back on. Aunt Aurelia only lives a short distance away, but Boyle Heights is so steeped in Latino culture that it may as well be on another planet. Unable to speak a word of Spanish and completely ignorant about their culture, Nora and Mary leave their comfortable world kicking and screaming. But the more time Nora and Mary spend getting to know their extended family, the more they begin to get a sense of what they've been missing by remaining locked in their ivory tower all these years. Before long Nora and Mary learn to regard their Mexican heritage with a sense of pride rather than shame and realize that all the money in the world can't buy the happiness of being surrounded and supported by family.

Honestly, I thought this was going to be another low budget film with a forgettable storyline. Well it begged to differ! After watching it, I felt more blessed to have known my roots although I can’t speak Mandarin *whistling* Errr… I can speak Hokkien and Cantonese mah! Anyway, back to the movie… I enjoyed the laid back, funny and ethical storyline. Although the casts were not famous, they totally played their part well. Surprisingly, the plot was conceived from Jane Austen’s Sense and Sensibility… I’ve read it before but couldn’t recall it *thinking hard* So East LA was not that bad after all!