This is unbelievable. Few months back, I heard on the news that more than RM2mill rebate was not claimed by Touch N Go users. Then recently Hubby went to redeem his and he was in for a surprise. All these while, we can redeem it any day at the limited selected outlets. Suddenly, they have this new policy which they had just stuck on their window =.= 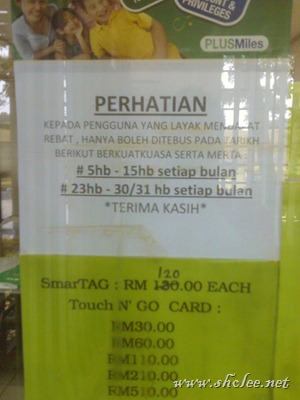 Now they have limited the days to collect the redemption =.= The best part, it was on 23rd when Hubby wanted to redeem the rebate but, so typical, the rebate was not in yet! WTF! With this ridiculous policy, I can assume they will report about RM4mill rebate not collected by Touch N Go users next year >.<

As it is, location to collect is limited and now with a certain window to collect will make matters worst. It has slowly becoming an inconvenient for most users who wanted convenience to use this facility. Perhaps they are hoping for this rebate exercise to cease???

Talking about convenience, I had an inconvenient experience recently. I wanted to top up my Touch N Go at the KL Sentral Rapid KL LRT station. As I still have time and the queue was short, there was another 2 person in front of me, I quickly queued up. However, the woman in front of me took at least 10 mins to settle her normal LRT card issue =.= The note on the window stated Touch N Go counter so I was wondering why the normal LRT card users are queuing here… pffft! It should be a dedicated counter for Touch N Go users and not sharing it with other commuters! I may sound crude but I can’t help it as my transaction took less than a minute. Her more than 10 mins complaining nearly cost me to miss my bus leh! WTF!

I remember their slogan has something to do with fast and efficiency but I don’t see any efficacy here =.=

Anyway, been lethargic due to excessive coughing and lack of appetite with too much medications. Just finished my meds and went for a second batch last night which was a HUGE mistake. It was a replacement doctor since it was late. His statoscope was broken, adjusted and tried to listen to my lungs then prescribed some meds. Took it when I reached home then tried to sleep as the cough pill was the drowsy type. Unfortunately, tummy gave way and I started vomitting >.<

Finally, after bouts of vomitting, also thanks to Hubby for making a warm honey, I was able to sleep… felt so weak. I suspected the antibiotic pills as I never had them before… either allergic to it or just an unfortunate tummy ache? I really don’t know. I’m afraid to take it now… what say you?