MPOV: Rise of the Planet of the Apes 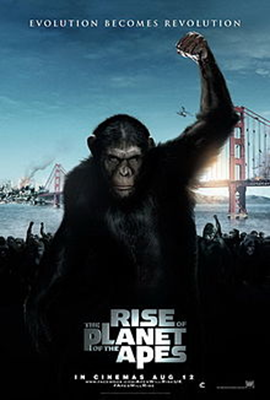 Will is a brilliant scientist who has been developing a cure for Alzheimer’s disease. They have been testing it on chimpanzees and one by the name of Bright Eyes showed promising test results. Will was in the middle of a presentation to introduce to the stakeholders of this scientific breakthrough when Bright Eyes suddenly went on a rampage and was shot down. Jacobs, Will’s boss, ordered Franklin, Will’s staff, to put down all the remaining chimpanzees. While doing so, Franklin discovered a baby chimpanzee in Bright Eyes cubicle thus dawning on them why she went on a rampage. As Franklin couldn’t kill the baby, he had asked Will to keep him. In the end, Will adopted him as his father, who has Alzheimer’s disease, became attached to the baby, naming him Caesar. As Caesar grew older, Will discovered he has his mother’s intelligence thus prompting Will to continue with his research illegally.

Honestly, a fantastic movie with superb CGI although with a tad predictable storyline and a movie title which is irrelevant! LOL! I thought the chimps were going to conquer the whole planet o.O Anyway, the chimpanzees looked so real… even to the tiny details of the facial expressions… especially Caesar, so good looking I might add. James Franco and Freida Pinto have great chemistry together… a perfect couple. John Lithgow, I’ve always remembered him for his comedic role in 3rd Rock from the Sun, acted very well as a father with Alzheimer’s. Surprisingly, the pilot neighbour was David Hewlett from Stargate SG1 and Stargate Atlantis! Haven’t seen him in awhile ^.^