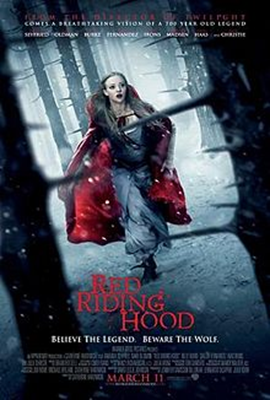 Valerie (Amanda Seyfried) is a young woman living in the village of Daggerhorn. She is in love with the woodcutter Peter (Shiloh Fernandez), but her parents Cesaire (Billy Burke) and Suzette (Virginia Madsen) have promised the wealthy blacksmith Adrian Lazar (Michael Shanks) that Valerie will marry his son Henry (Max Irons).

Valerie plans to run away with Peter, but their plans are put on hold when the town sirens erupt, telling the couple that the Wolf who terrorizes their village has struck again. The victim is found to be Valerie's older sister Lucie (Alexandria Malliot). The townspeople have offered a monthly sacrifice to the Wolf and made it clear that it should stay away from the woods. However, Lucie ventured there after discovering that Valerie had been promised to Henry, with whom Lucie ostensibly was in love.

Adrian, Henry, Peter, Cesaire, and the other men venture out into the woods to hunt the Wolf. They manage to behead one, killing Adrian in the process. The men bring the dead wolf back to the village, thinking it was the one that had been terrorizing the village.

Hmmm… this is definitely written using the original story as a guide only and made it into a thriller! With the twisted story, you can never guessed who the wolf is until towards the end. A lot of suspects but in the end it was someone which I kept thinking ‘no lah… cannot be’. I won’t be a spoiler and revealed the answer although I was tempted ^.^ A very interesting movie with beautiful sceneries… just loved the way they played with colours i.e. red robe on white snow.