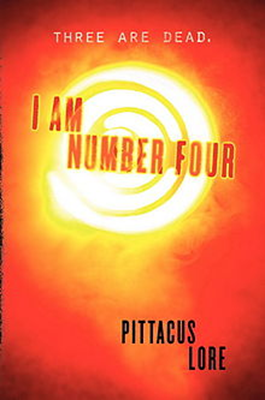 This follows the story of John Smith, a 16-year old alien from the planet Lorien, and his Cêpan, Henri, as they run from the Mogadorians, another race of aliens that are hunting down John and the eight other teenage Loriens, who compose of the Garde residing on the planet Earth. The Garde contains of all Lorien people who have "Legacies" or special powers. The teenagers are protected by a spell or charm, that only allows them to be killed in a special order. John is next in line.

The book opens with the death of Number Three. Number Four is introduced, going by the name of Daniel Jones, as he leaves Florida. Four has three circular scars wrapped around his right ankle, signifying the deaths of Numbers One, Two, and Three. These scars are present on all the Lorien teenagers, and with each death, another scar appears. Henri, Four's Cêpan (guardian), tells him they are going to Paradise, Ohio. Four is given the name John Smith as his new alias.

Tired of running, John says that he wants to begin to make a life for himself. Henri reminds him why they run, and the conversation ends. John begins to attend the local high school, where he meets Sarah Hart, a blonde junior. He also meets her ex-boyfriend Mark James, who immediately begins to pick on John. John stands up to him, the first time he has ever stood up to anybody.

An interesting science fiction, apparently meant for young adults o.O It may looked like a low budget film but the CGI was good, realistic. Good castings though never heard most of them. Even the songs were good especially Adele’s Rolling in the deep… suited the movie well! An action-packed movie which should have been watched in the cinema ^.*