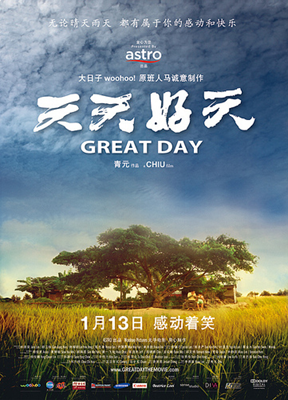 It revolves around the lives of those staying at an old folks home in the north. A father trying to make ends meet and a better life for his son. An old man pinning for his children and grandchild in KL. Another old man always bickering and boasting. They seldom have visitors, only the occasional entertainer who entertained them. When the father and son went to visit grandma in KL, 1 of the old man quietly sneaked into the back of their lorry. Mid way through, they found out and let the old man sit together with them. They were surprised as he could have asked them directly instead of sneaking in. Once in KL, they went their separate ways and the story unfolds some worthwhile and meaningful episodes.

A local production by Astro, it was honest, straight to the point and definitely a tear jerker. So make sure you have your box of tissues ready

The sceneries were great too, portraying the beautiful countryside, the busy metropolitan KL and the typical Malaysian attitude. For those who doesn’t appreciate their parents, this movie will definitely hit home ya! It is a very meaningful movie with a simple storyline which was also entertaining. Kudos to our Malaysian actors… they were great acting skills. A light and endearing movie to watch with family and close friends.