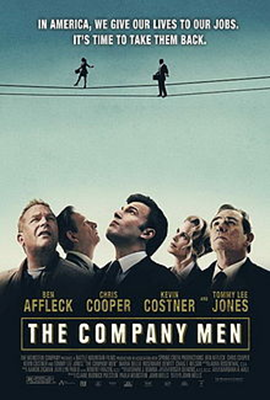 The film, set in and around Boston, Massachusetts, analyzes the effects of corporate downsizing. Ben Affleck plays an aggressive white-collar corporate ladder climbing employee who, after losing his six-figure salary, gradually loses the trappings of his white-collar life (Country Club membership, Porsche, and finally his home) and finally has to take a job installing drywall with his blue-collar working brother-in-law, played by Kevin Costner. Chris Cooper plays a middle manager who has risen from the factory floors to the corporate offices. He also loses his six-figure salary job, but because of his age is finding himself unemployable. The pressures on the two men (both of whom had comfortable, but paycheck-to-paycheck lifestyles, and have children to support), grows as weeks and months pass by with no prospects of employment appearing. On the other side of the coin, the cushy lives of executive management are noted with both Tommy Lee Jones and Craig T. Nelson playing characters who suffer no misfortune during the trying times, until Jones' character is served his walking papers. Although Jones' character is a well-liked executive within the company that Affleck and Cooper's characters are close with. Maria Bello plays the unfortunate senior HR manager forced to deliver the bad news to staff whose jobs are cut and are shown the door. Jones is clearly in a much more comfortable position after being fired, and begins seemingly a form of retirement, seeking no other employment. Yet the effect of the downsizing upon others, along with his blue-collar tendencies to want to get back to the basics of men and women working hard to actually produce something of value, weigh upon his conscience and mind.

An interesting and realistic movie about the real world, which totally hits on the right nerve, especially for those who had or currently experiencing life’s difficulty. The portrayal of egoistic men, who think they can still sustain a comfortable lifestyle while searching for jobs, had many slaps on their faces before totally awaken by reality. Well, reality bites thus not for the weak at heart. Those who cannot except it will think of committing suicide. Sounds familiar? Well, this movie is highly recommended for such egoistic person or those who think life is easy or those who are born with a silver spoon and damn lazy to work or whoever that cares...