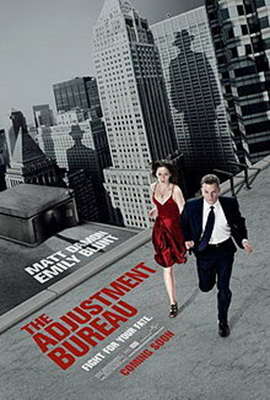 In 2006, New York Congressman David Norris runs a promising but ultimately unsuccessful campaign for United States Senate. While rehearsing his concession speech in a hotel bathroom, Norris meets a woman hiding in a stall. The two share a surprisingly enjoyable conversation, ultimately leading to a kiss. Inspired, David goes off his prepared script and delivers a candid speech which is extremely well-received, making him an early favorite for the 2010 Senate race.

One month later, Norris is privately employed and preparing to run for Senate in 2010. At a park near David's house, Harry Mitchell receives an assignment from his boss: Ensure Norris spills his coffee by 7:05 AM; shortly thereafter Mitchell falls asleep while waiting and misses David, who boards a bus. On the bus David encounters Elise, the woman from the bathroom, who gives him her phone number. When Norris arrives at work, he finds his coworkers immobile and his boss (and campaign manager), Charlie Traynor, is being examined by unfamiliar men in suits. David attempts to run and the men give chase. Eventually, David is incapacitated and taken to a warehouse to meet Richardson and his men.

Richardson explains he and his men are from the Adjustment Bureau. Sometimes called angels, the job of the Bureau's "caseworkers" is to ensure people's lives proceed as determined by "the plan", a complex document Richardson attributes to "the Chairman." Charlie is fine and will not remember his adjustment, and Norris is warned that, if he talks about the Bureau, he will be "reset"—effectively lobotomized.

Finally, Richardson tells David he is not meant to meet Elise again, burns her phone number, and tells David to forget her.

At first sight, the movie looked uninteresting. Once started, I was hooked. It’s a love story with a twist. Yes, my cup of tea! The title of the movie sounded otherwise… like another boring lawyer story ^.^ Both Matt Damon and Emily Blunt were good together, great coupling and totally believable. The so called angels reminded me of those lower ranked workers from the Jade Emperor’s office in the Chinese series/ drama… running the chores, hovering over us humans, monitoring our every move LOL! I loved the hat and door concept! It’s sooo cool! I know it’s just make-believe but it was totally believable.