Finally, the last instalment of Harry Potter *grinning*. Mind you, I have read all 7 books and I have enjoyed every single moment. I do have a poor memory so whenever I watched a movie adapted from a book, I can’t remember most of it, which is good as it will not become a spoiler for me *phew!* 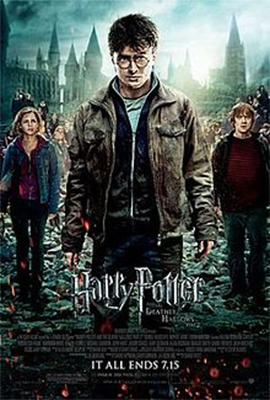 It started where part 1 has left off, Voldemort got hold of the Elder Wand from Dumbledore’s tomb. Harry has given Dobby a proper burial and went on to speak to Griphook, a Goblin, about breaking into Bellatrix’s vault at Gringotts. He suspected that she is keeping a Horcrux there. Griphook agrees to bring them to her vault with 1 condition which is to give him the Sword of Gryffindor. Harry reluctantly agreed and proceeded to speak to Ollivander, the wandmaker. After that, Hermione drank the Polyjuice Potion to disguise herself as Bellatrix and headed to Gringotts as planned. Once inside, the goblins detected and knew she was a fraud. One by one their plan failed and their adventure became more and more dangerous!

Thankfully, we watched this movie in 3D. On the bright side, it was cool to watch the dementors and death eaters flying around us. On the other hand, the movie was filmed mostly during the night. As such, it was kinda difficult to watch the movie with the 3D glasses since there was quite a lot of dark sceneries. Anyway, it was engaging and kept me on my toes. It also has more wand fighting scenes which made the movie more interesting. The computer graphics and 3D were also very realistic, good to the end. Now we have closure and I’m going to miss Harry, Hermione and Ron. Oh ya, Voldemort too… with his flat nose and girlish voice. I totally admire and respect J.K. Rowling. Her imagination really went wild, in a good way, and made her one of the most successful author. She’s like the Enid Blyton of the new millennium ^.^