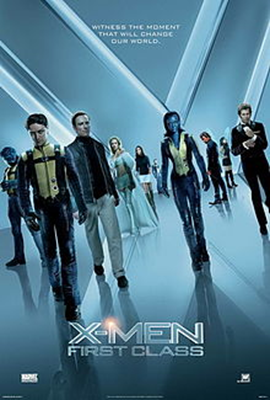 1944: It started off with the young Erik Lensherr at a German concentration camp in Poland. He was separated from his parents by accident. While trying to run back to his parents with the army holding him back, he bent the metal gate with his mind. Dr. Schmidt witnessed this and requested for him.  In a mansion, young Charles Xavier was awoken by some noise in the kitchen. His mom apparently was looking for something to eat. Charles knew it wasn’t her and asked her to reveal herself. Being a telepath, he knew she was someone different. He quickly asked Raven, a homeless shape-shifter, to live with his family.

1962: Erik was hunting for Schmidt, to avenge his mother’s death. Charles, on the other hand, was busy with his thesis on mutation with Raven being his foster sister. CIA Moira was following Colonel Hendry into Hellfire Club and slowly discovered other mutants working for Schmidt inside the club.

Overall, it was an interesting take about X-men… on how they actually started. It felt as though I was reading a History text book but in a movie cum comic format ^.^ At some point, I find the dialogue too lengthy… wished there were more actions though. Probably I was too tired that night so the dialogue actually got into me *yawn* Castings were great especially Kevin Bacon as Dr. Schmidt, I actually despised him in the movie *slaps forehead* I loved the way they changed into their alter-egos like Raven, my oh my, was so ravishingly Mystique. Emma was the best, diamonds are totally a girl’s best friend, literally!