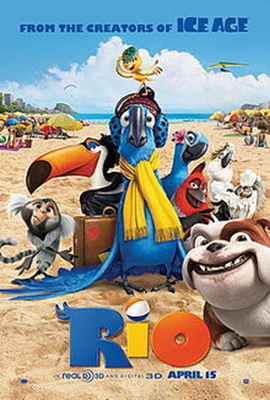 The story takes place in Rio de Janeiro; wildlife trade is common there, and several types of exotic birds get smuggled to different countries. One such bird is Blu, a Spix's Macaw who is unable to fly and his owner is Linda. The film begins with Blu being smuggled from Rio to the city of Moose Lake, Minnesota. Shortly thereafter, Linda finds him as soon as he arrives in Moose Lake in the snow. Fifteen years later, Blu and Linda have become friends and live together in her bookstore. Blu is still unable to fly, but has adopted Linda's lifestyle. However, Blu is ridiculed by local animals.

One day, a Brazilian ornithologist named Túlio Monterio informs Linda that Blu is the last male of his species. Túlio also says that he has discovered a female Spix's Macaw in Rio named Jewel, and offers her to take Blu to mate with her to preserve the species. Túlio, Linda, and Blu are flown to Rio, where Blu meets a Red-crested Cardinal named Pedro and his Yellow Canary friend Nico. Blu is taken to Túlio's aviary, and falls in love with Jewel, who desperately longs to escape into the wilderness. Blu and Jewel are captured by a young boy named Fernando and a Sulphur-crested Cockatoo named Nigel, who works for a group of smugglers led by Marcel. Nigel tells the two that he was once a popular performer on a television program, but he was soon replaced by a parakeet. Embittered by this experience, Nigel specializes in capturing exotic birds such as Jewel. Blu and Jewel flee from Nigel and the smugglers, ending up in a jungle.

This is the most colourful movie I’ve ever watched, definitely memorable with a nice write-up. It’s entertaining with plots which were hilarious and creatively set, also with sad and enthralling moments. I’ve never seen a bird who couldn’t fly before… this is a first… I wonder if this is true. I mean is there such a bird who couldn’t fly… apart from injured birds of course *thinking* Furthermore, a bird who can adapt a human’s lifestyle… how cool is that? Anyway, Angry Birds, a mobile video game, was also concocted based on this movie with a team up between Rovio Mobile and 20th Century Fox. A good movie to watch with the family for sure…