Anyway, back to the movie, taken from Wikipedia: 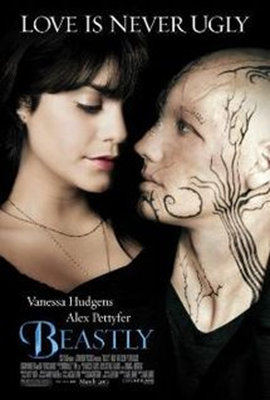 Kyle Kingston (Alex Pettyfer) is the arrogant and vain son of wealthy and equally as arrogant and vain news anchor Rob Kingston (Peter Krause). When he wins student body president, he bullies the eccentric Kendra Hilferty (Mary-Kate Olsen) for being ugly and strange at the after-party. Disgusted, Kendra magically transforms Kyle into a bald, and scarred shell of his once-handsome self. Kendra says Kyle has until the next spring to find someone who loves him or he stays this way forever. Rob takes Kyle to live in a private condo with their maid, Zola (Lisa Gay Hamilton), and Kyle's blind tutor, Will Fratalli (Neil Patrick Harris). Rob initially promises to support his son, but gradually neglects his son over time and stops visiting him after work altogether. Angry and hurt, Kyle finds sympathy from Will, Zola and her sister, Letisha (Regina King).

As spring draws closer, Kyle finds himself infatuated with Lindy Taylor (Vanessa Hudgens), a girl from his former school who he had initially been as distant to as he was to Kendra. When Lindy and her father are about to be mugged by two brothers on the street, Lindy's father shoots one of the brothers, the surviving one vowing vengeance by taking Lindy's life. Kyle saves Lindy and her father, and arranges for Lindy to move in with him for her own safety. Initially, Lindy is furious about hiding, since she was to go to Machu Picchu on a field trip - but after she claims she's seen worse when Kyle reveals himself to her (now calling himself "Hunter" around her), they warm up to each other. Kyle writes a letter to Lindy professing his love to her, but he never plans to give it to her, in fear of Lindy not feeling the same way. Will and Zola continue to help Kyle win her over, as the two begin to fall in love. In time, he completely wins her over when they read Frank O'Hara's poem "Having a Coke with You" together out loud. Closer to spring, Kyle makes a deal with Kendra that if he succeeds in winning Lindy's heart, she will restore Will's vision and grant citizenship to Zola's three children in Jamaica.

Hmmm… when I first saw the trailer, it got me intrigued. However, after watching the movie, it’s a whole different story. I expected a Beauty and the Beast kinda story, which was half true. There were many grey areas in the storyline, like it’s been squeezed and rushed to finish in time. Parts I don’t get it:

I felt the whole courting and relationship thingy don’t look genuine enough or true to be realistic. It just wasn’t as great as Beauty and the Beast. The plus side… I loved the way Mary-Kate portrayed Kendra, although for a short while. Her character does leave an impression… totally loved her gothic fashion too!