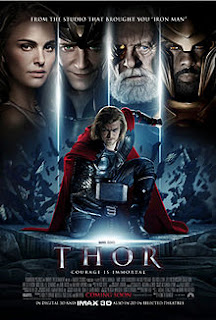 When I saw the movie poster initially, it didn't attract me. After watching the movie, lo and behold, I was flabbergasted!

The movie started off with Odin, King of Asgard, telling his sons how he had defeated the Frost Giants, preventing Laufey, the Frost Giants' leader, from conquering the Nine Realms. Then the young Thor and his brother, Loki, learnt of the importance of keeping the Casket of Ancient Winters away from the Frost Giants. Moving forward, Thor was about to descend the throne of Asgard when some Frost Giants were able to pass through the strict security to steal the Casket. They were not successful but the ceremony has been halted. Thor, on the other hand, wanted to go to Jotunheim to confront Laufey but Odin was against it. However Thor went against Odin's order and travelled to Jotunheim together with his buddies and Loki. All hell breaks loose in Jotunheim and Odin had to finally come to save them. Upon reaching Asgard, as his punishment for not obeying Odin's order, Thor was banished to Earth and stripped off his powers. Thor's learning curve begins while being a mortal.

Storyline may be simple since it's adapted from the comic book but it's good enough to keep me entertained. Even the actions and CGI were good, no comments here since it's a fantasy action movie. It may looked like another low budget type of movie but it isn't... it's totally worth it to watch in the cinema. Of course, not forgetting Chris Hemsworth, needless to say, was breathlessly fantastic! *drooling*