Our World, Their War

GSC-EON Bank Credit Card has organized an exclusive screening to Transformers 3: Dark of the Moon. Yippee!!! Hopefully The Ultimate Movie Card would be kind to let me score some passes ^.^

Synopsis:
The Autobots learn of a Cybertronian spacecraft hidden on the Moon, and race against the Decepticons to reach it and learn its secrets, which could turn the tide in the Transformers’ final battle.

Being an Autobot is not an easy feat as the world is corrupted, which can be easily manipulated by the Decepticons. To protect the world from Decepticons, Autobots have to always be alert, on their feet. One of the way to ensure all the good citizens are accounted for is by having a special ID to recognize them, also allowing them to trigger for help whenever they are in danger.

Another way would be inserting a special chip into the brains of the corrupted criminals. This chip can override the existing brain wave and erased the dirty, corrupted mind. It will create a new wave with the right mindset. This task is definitely suitable for Bumblebee. Why? Well, I can cruise around the streets looking for criminals. Once caught, I can hypnotized them with my radio frequency and then quickly insert this special chip. Easy peasy! 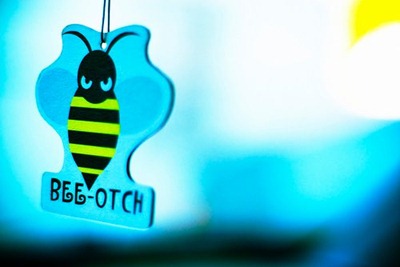 FYI, did you know I have this cute air-freshener in me? I mean inside Bumblebee *blushing*

We can avoid a big war on Earth once we all worked together as ONE. The Decepticons will have to find other avenues to manipulate mankind to create their war.