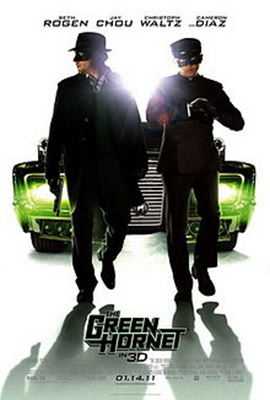 Brett Reid is a rich, spoilt brat. One day, his father, a newspaper magnate, suddenly died in a freak accident… he was found dead from an allergic reaction to a bee sting. Brett was so devastated that he fired all the helpers until he discovered he has accidentally fired the coffee maker. The coffee maker, Kato, was rehired due to this. Later they became good friends, inseparable and Kato revealed his true self one night. Britt was in awe and decided to partner with Kato to fight crimes. They became a news sensation by chance. Thus Green Hornet was borne, name hatched by Brett’s team of writers at his dead father’s newspaper company.
Seth Rogen and Cameron Diaz were looking good and they were at ease in the movie. Jay Chou, on the other hand, looked stiff and unnatural. It was awkward, looking at Jay Chou trying to blend in. I can never understand why they selected Jay Chou to act as Kato. Speech aside, I felt that Jet Li would have been a better actor, compared to Jay Chou, more au naturel too in this Kato character. Btw, according to Wikipedia, Jet Li was the original choice but it didn’t work out. The storyline was ok lah, typical, but fighting scenes were overly done, too much CGI that it felt fake. Probably to suit the superhero themed movie but it didn’t leave a good taste on me…
Sorry Jay Chou fans… this is just my POV.
4 thumbs up out of 10
Email ThisBlogThis!Share to TwitterShare to FacebookShare to Pinterest
Sections: Movies