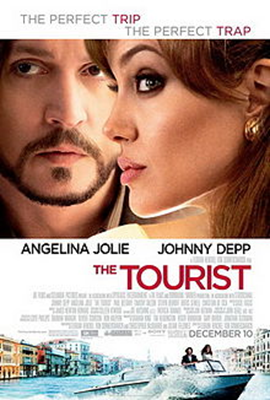 1 used to be my favourite actor, another I envy totally! Yes, you can guess as much… I like Johnny Depp during his heydays on 21 Jumpstreet. He looked damn good back then *drooling! *Slurp! Angelina Jolie.. hmmm… she’s poised, beautiful, perfect! She looks damn good, even after 3 babies, jealous max! Totally envy her, mainly her charitable nature… her tattoos… damn! Oops! Better stop it or else you might think I’m *Bi*

Anyway, the story revolves around Elise who is being watched by practically everyone! Her mysterious and missing boyfriend, Alexander Pearce, is a wanted man hence she is a target from the mobs to the Interpol! She finally received a note from him, giving her instructions to delude the police. When she finally boarded the train, she met an American tourist, Frank. They became friends and Frank’s mis-adventures begin soon after!
Honestly, when I first saw the trailer and poster, I wasn’t interested to watch. It didn’t do much justice to attract me. When I finally watched it, lo and behold, I was totally mesmerized by the story that revolved around beautiful Venice! To some, the story line may be slow but not for me. I find the pace just nice with many funny moments. Yes, it was totally hilarious! Although not much fighting, there were many exciting moments which were entertaining. Venice is beautiful… it truly amazes me with the many canals and boat rides. The chemistry between Johnny and Angelina were fantastic. An unusual spin off from their usual characters i.e. Johnny loves being quirky and weird and Angelina loves being tough and strong. A beautiful location, a good combination, a worthy movie to watch!
A spoiler thought: When she kissed Frank, how come she didn't recognized the similarities?
8 thumbs up out of 10
Email ThisBlogThis!Share to TwitterShare to FacebookShare to Pinterest
Sections: Movies