I've always enjoyed locally made movies, although it's in Mandarin and I would have a hard time reading the sub-titles. It has values and meaningful to watch, unlike some foreign movies where there's no storyline at all but with loads of fighting or gruesome scenes. 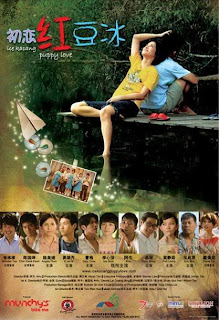 This story was retold by Botak, a coffee-shop owner's younger son. It's a story about his 'puppy love' which lasted more than 10 years. He has been secretly admiring Fighting Fish, daughter of char koey teow seller Yue Feng, and has been at her side through good and bad times. Botak, Fighting Fish, Ma Linfan, Ma Libing and Prince Charming have grown up together in this small town where everyone knows everybody. One day, due to a misunderstanding between Botak's parents and Fighting Fish's mother, which was instigated by Ma Linfan's mother, Yue Feng decided to marry the taxi driver. Fighting Fish has always misunderstood her mother, blamed her for leaving her father, hence furious with her for remarrying. Fighting Fish decided to go back to Penang to look for her father, pulling Botak to accompany her. Once in Penang, the true story unfolds...

This is truly a locally made movie with an all-local casts. Ah Niu, besides being a first time director, has also written this script and acted as Botak. Angelica Lee is Fighting Fish, Gary Chaw is Ma Linfan, Fish Leong is Ma Libing, Victor Wang is Prince Charming and the list continues. The locations in this movie are totally picturesque... so beautiful... never knew Tronoh and Chew Jetty were so photogenic! The story has a different feel from the others... it's like Ah Niu has written this based on his past experience, instead of writing a song, he has transformed it into a movie. A superb effort for a first timer! Bravo!