When I first saw the billboard, I was not attracted to it. Hubby, being a fan of local and Asian movies, decided to watch it. Of course with me in tow. 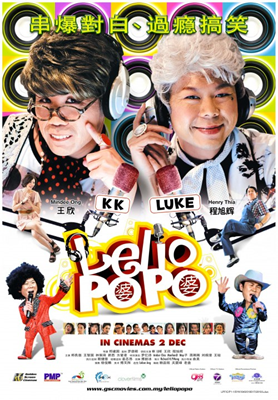 2 famous DJ’s with terrible attitudes were sacked one day due to their floppiness. They obnoxiously think they can get another job easily but they were wrong as their previous manager had publicized their terrible attitudes in the newspaper. Jobless, they had to find other jobs as they need to pay their bills and feed their stomachs. One day, they found a vacancy looking for grandmother’s as Lelio PoPo. They decided to try it and got their good friend Franky to change them into grandmother’s!

Honestly, the plot is hilarious albeit a simple, moralized one. KK and Luke did a great job, totally funny with superb chemistry even in acting! Mindee, Alaric and Henry added the pizzazz required. Benjamin was totally cool as Franky… ‘Herng li hai meh?’ his favorite phrase! Although a lame movie, it brings to attention all the important messages the society must realized. Why realized? Well, the society nowadays are very selfish and have no respect for the elders. This is a reminder to them, making them realized their own terrible attitudes. Similar to Yasmin Ahmad’s movies and advertisements, a plot with many hidden and clear messages for all to decipher. There were funny moments which was totally hilarious, sad moments which made me cry… a good, must watch movie!

The moral of the story, do not be obnoxious, treat people fairly with respect and most importantly, respect the elders.