Review: The Chronicles of Narnia: Voyage of The Dawn Treader 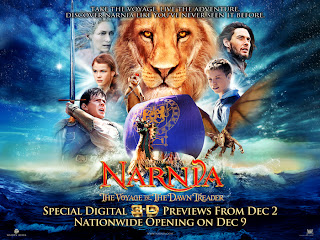 Lucy and Edward have been staying with their cousin, Eustace. However, they are not in good terms thus Lucy and Edward have been hoping to quickly join with their parents, Susan and Peter in America. While in Lucy’s room, Lucy and Edward were reading a letter from Susan when Eustace barged into the room and complaint endlessly. Ignoring him, Lucy and Edward realized a Narnian looking ship has appeared in a painting on the wall. Slowly but surely, the sea in the painting suddenly became alive and flooding the room. Eustace was shocked! The flooded room turned out to be the sea when they resurfaced, with King Caspian and his crew bringing them onboard. Once onboard the Dawn Treader, their Narnian adventure begins! 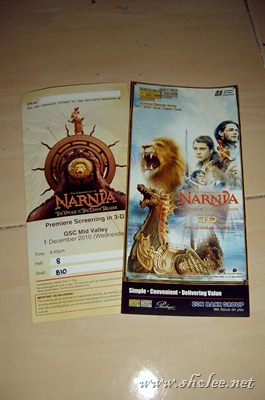 Thanks to Nuffnang and GSC-Eon Bank Card, I got 2 tickets to watch the Premiere Screening in 3D last Wednesday! I’ve decided to bring Tyger as he has always been a Narnian fan. Hubby and Princess spent their quality time roaming around Mid Valley and Gardens, snapping photos endlessly! I’ll be posting that another day ^.^ Before the movie started, Ean and Moots! from hitz.fm were there to host the gala. There were simple games… photo taking in Narnian gears… etc. 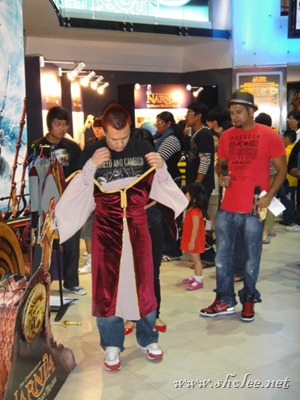 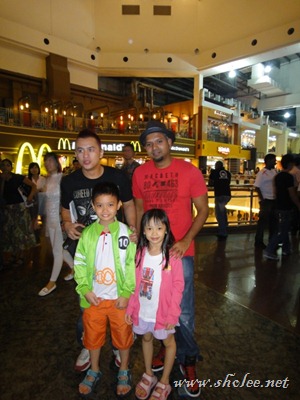 The movie overall was adventurous, with some epic drama. It’s loosely based on the diary written by Eustace, his point of view after discovering Narnia to be true. All the casts have grown up and blended well into the movie, hence it’s very realistic with beautiful sceneries. The storyline may be a little predictable but the overall adventure kept me on my toes. Why I say predictable? Well, most of the time, it’s Lucy who always gets kidnap and Eustace who gets himself into trouble. The ending was predictable too but kinda interesting when they discovered Aslan’s home. It reminded me of the 10 Commandments ^.^ Btw, not much 3D effects though… so can forgo paying extra.

7 thumbs up out of 10
Email ThisBlogThis!Share to TwitterShare to FacebookShare to Pinterest
Sections: Contests, Movies

I just watched today. Love it! But yeah...the 3D effect wasn't worth the money paid :-(

Harry Potter is as good :-)