Hubby and I took leave last Wednesday as I had preparation to make for Kuo Tung prayer and also a day out with my angels. I will share our outings in a later post as it will definitely be a long one since we went to 3 different places… many photos to share too ^.^

For those who didn’t know, extracted from Wikipedia:

The Winter Solstice Festival or The Extreme of Winter (Chinese and Japanese: 冬至; Korean: 동지; Vietnamese: Đông chí) (Pinyin: Dōng zhì), (Rōmaji: Tōji), (Romaja:Dongji) is one of the most important festivals celebrated by the Chinese and other East Asians during the dongzhi solar term on or around December 21 when sunshine is weakest and daylight shortest; i.e., on the first day of the dongzhi solar term. The origins of this festival can be traced back to the yin and yang philosophy of balance and harmony in the cosmos. After this celebration, there will be days with longer daylight hours and therefore an increase in positive energy flowing in. The philosophical significance of this is symbolized by the I Ching hexagram fù (復, "Returning"). Traditionally, the Dongzhi Festival is also a time for the family to get together. One activity that occurs during these get togethers (especially in the southern parts of China and in Chinese communities overseas) is the making and eating of Tangyuan (湯圓, as pronounced in Cantonese; Mandarin Pinyin: Tāng Yuán) or balls of glutinous rice, which symbolize reunion. In Korea, similar balls of glutinous rice (Korean: 새알심) (English pronunciation:Saealsim), is prepared in a traditional porridge made with sweet red bean (Korean: 팥죽)(English pronunciation:Patjook). Patjook was believed to have a special power and sprayed around houses on winter solstice to repel sinister spirits. This practice was based on a traditional folk tale, in which the ghost of a man that used to hate patjook comes haunting innocent villagers on the winter solstice. Families eat pink and white tangyuan, symbolizing family unity and prosperity. 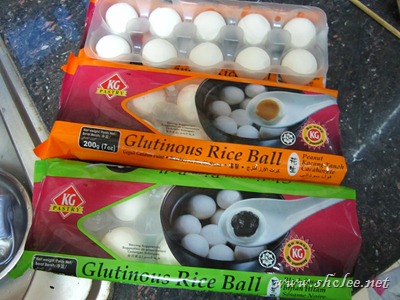 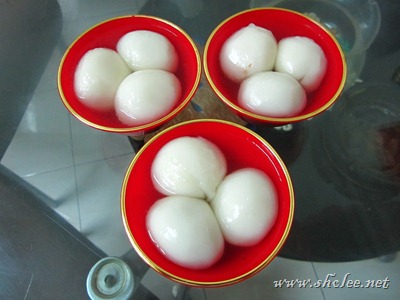 It turned out to be huge! So limited tong yuen in a bowl! The ones I used last year were without fillings, much smaller and I could fill up a lot in a small bowl. 3 bowls of offerings… 1 for Tin Kung (Jade Emperor), 1 for Guan Yin (Goddess of Mercy) and 1 for Tei Chi Kung. Thankfully my angels enjoyed it too!

Anyway, today is Christmas eve… Princess has been waiting anxiously for 12am to open her presents! She has been shaking it vigorously, hoping it will break or tear the wrappers! LOL! 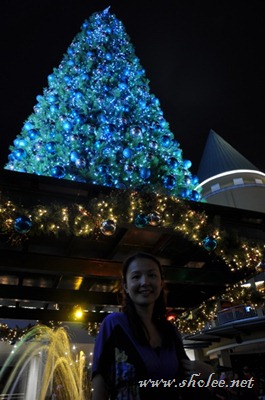 Here’s me wishing all my friends, fellow bloggers, loyal readers and people around the world…

A very Merry and joyous Christmas… a Happy and wonderful 2011 New Year! May God bless you all!