Hubby and I took leave last Wednesday to bring our angels for a day trip to Malacca (Apologies for the late post as I was really busy and was not well after that). We actually planned to go to Jonker Street and some historical sites but we got diverted instead. Thanks to hitz.fm, we heard that the Planetarium in Malacca was staging a fair with NASA. Yes, NASA from USA! This prompted us to go there instead since we haven’t been to a Planetarium before ^.^

The overall journey took us 1 1/2 hours, thanks to a jam-free highway. However, after the Ayer Keroh tol, we were kinda lost as we couldn’t find the Planetarium. The signage's were totally useless as it led us midway only. We nearly missed it then realized it should be nearby MITC as most government buildings were there. Thankfully we were on the right track and found the white building! 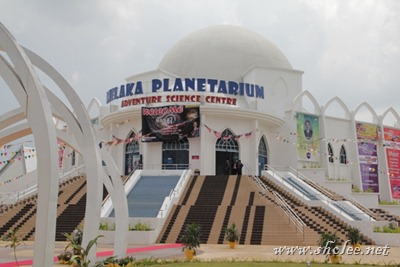 In collaboration with NASA, the Melaka Planetarium was having a Space Fair 2010 from 22/11/10 to 28/11/10 10am to 6pm. The entrance fee was at a discounted rate i.e. adults RM8 only per pax, students and senior citizen RM5 only per pax. It was a very good first impression too as they were friendly and greeted us, they even had a guide to guide us around. I was totally in awe!

Our first stop was to attend a mini workshop where we learnt about the use of Spectroscope and discovered the harmfulness of Ultra Violet rays.

Through this Spectroscope, we can see the many spectrums from different light source except for the sun. We were told not to look directly at the sun with it. For more details of this Spectroscope, you can log on to http://solar-center.stanford.edu

The Ultra Violet Detecting Beads looked like any other ordinary beads but once it hits the sun light, it changes colour. Yes, it changes colour because of the UV rays from the sun. Cool right?! Once we applied some sunscreen on it, make sure it’s SPF100, it doesn’t change colour at all! It shows how important sunscreen is in our lives and it has to be SPF100 to be fully protected from the harmful UV rays.

The next stop was to watch a 3D documentary about space. Surprisingly the voice for this documentary was Whoopi Goldberg!

After the 3D documentary, we walked around the Planetarium as our guide went missing

Telescopes, planets, gadgets, etc… it felt as though we were back in a school trip! Hubby remembered the next workshop had something to do with robots so we went hunting for it. The nice lady at the planet table took us directly to the workshop as it was quite a distance. We then realized there were 2 classes but I can’t remember the names exactly *slaps forehead* so we shall call it ‘how to make a simple rocket and the robotic experience’.

We thought it would be something great when we saw the word rocket but it turned out to be a ‘straw rocket’! Yes! Just roll a paper, tighten the tip, made the tail wings and inserted the straw in the middle! After that just blow it! Geez!

This one was totally worth it as 1 of the NASA crew was there to guide us, Mr. Paulo, who happens to be the creator of this robot which roamed on Planet Mars. The said robot here is a replica in a smaller scale which we get to simulate and move the robot from 1 end to the other. The robot itself is controlled by the computer and we need to enter the right command i.e. angle and distance to ensure it moves correctly to the end destination. We were divided into 4 teams, each team managed a robot respectively. My angels were in the green team which happened to finish this quest first! It was really fun and Tyger was totally impressed with all these robotic stuff! It made him liked Science more!

After the Planetarium, we went to Jonker Street for a very late lunch! It was nearly 4pm so it’s actually time for tea

We went for the usual chicken rice ball and iced cendol. After lunch, we walked along the street, checking out some of the shops. However, midway through we realized we lost our carrier bag! Tyger had misplaced it and we had to run all over Jonker Street looking for it! Besides bottled water and handkerchiefs, Tyger’s PSP was inside it! *Cold sweat* Thankfully the lady in a shoe shop kept it aside until we returned for it. We were so grateful for her as everything was intact… Tyger was so relieved when he saw his PSP! Phew! It’s seldom we meet such an honest person nowadays…

Thanks so much shoe lady! Sorry we forgot to note your shop’s name ^.^ Thanks again!

We left around 6pm as it was late already… we had to rush back for the special screening of Rapunzel in 3D… thanks to Churp Churp! Anyway, for those who are interested, below is the address for the Planetarium: