When I heard rumours of the new Proton car to be based on Mitsubishi Lancer, I just waived it off thinking that they would probably copy some and add most of their own design. How wrong I was!!! When it was revealed last week, I nearly fainted.

For those who didn’t know, this is how Mitsubishi Lancer looks like: 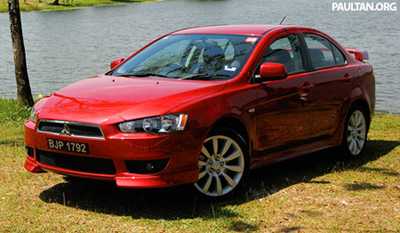 This is how the new car named Proton Inspira looks like: 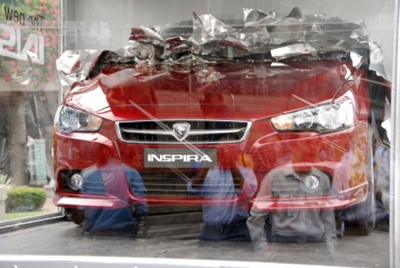 Did you see any difference? Not much actually! They just changed the front nose, back bumper and rims! I’m not sure of the interior though as it will only be launched officially in November. It rendered me speechless…

Proton is so proud of this rebadged Mitsubishi Lancer. I totally wonder what their R&D felt inspired about when they rebadged this new car! Ok ok the be fair, this is the first batch where it will have 20% local content, the next batch would have 40% and the official batch will have 60%. Still… don’t they have their own original idea or design to make, a local car which we can feel proud of instead of feeling ashamed when we or even the foreigners could get confused with the design and model later on. I won’t be surprise if there’s a hike on the crime rate for stealing car accessories in the near future. A thought, Inspira owners might want the original Mitsubishi emblems to replace their Proton ones. Luckily Hubby had removed all his emblems to keep his car looking neat :-)

I still remember previously when we were stopped during a roadblock:

Anyway, sad to say there will be a drop in resale value of Mistubishi Lancer’s but the Inspira is also overpriced for a local car. So it’s up to the buyers which they prefer. One thing’s for sure, I believe they can do cosmetic changes to Inspira and mod it to look like the original Mitsubishi Lancer. More confusion later on but good news to car workshops!