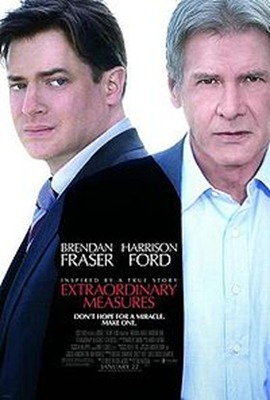 It is based on a true story. Brendan Fraser plays John Crowley, a biotechnology executive whose two youngest children were afflicted with Pompe disease or acid maltase deficiency. Along with his wife Aileen (Keri Russell), he raises money for research scientist Robert Stonehill (Harrison Ford), forming a company to develop a drug to save his children's lives. The film centers on the Crowleys' two dying children, aged 8 and 6. In real life, most children with Pompe disease would die before age 2. There is also a juvenile and adult form which can present at almost any age. Those in the real story were 15 months and 7 days old when they got sick. They were 5 and 4 years old when treatment began. Adapted by Robert Nelson Jacobs from a nonfiction book " The Cure: How a Father Raised $100 Million--and Bucked the Medical Establishment--in a Quest to Save His Children " by the Pulitzer Prize journalist Geeta Anand, the film is also an examination of how medical research is conducted and financed.

Honestly, I have never heard of Pompe disease and it was sad to see the condition of the 2 dying children. It’s an eye-opener for me, made me realized how lucky I am to have 2 healthy and beautiful angels. I was awed with the courage of both John and Aileen Crowley, fighting the odds to save their children’s lives. Because of them and scientist Robert Stonehill, who believed in a theory that Pompe can be cured, so many lives of other sick children were saved :-) Bravo to the Crowleys’ and Robert Stonehill!

Just to share what this disease is about, extracted from Wikipedia: