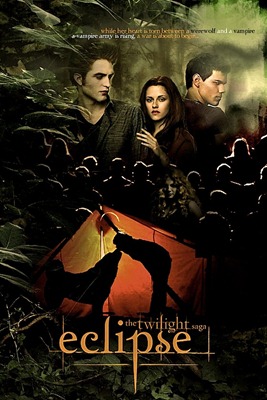 Finally, watched a Twilight movie in the cinema last night with Ann and Eric! Thanks to Ann, her birthday treat for me :-)

Bella and Edward are still very much in love and they are graduating soon. Jacob is still hopelessly in love with Bella. The Cullens have been actively checking on the mysterious disappearance and killings in Seattle. This is because Victoria has been busy creating an army to avenge her beloved James’ death. As Victoria and her army of new borns are coming, The Cullens were busy planning the counter attack. Bella had also gotten them to work together with the wolves. Bella has also accepted Edward’s marriage proposal and Jacob was pretty much upset about it. Although he managed to prove that Bella has feelings for him too but it was not enough. A date has been set for the wedding :-)

I have not read the books yet, so I’m not sure how much of it was from the book. All I can say is that it’s much better than New Moon but somehow wane off from Twilight. Some parts were hilarious… not as intense as before… not as great looking as before :p Hilarious because of the way they acted, the things they said i.e. Jacob said ‘I’m hotter than you’ to Edward! Some parts got my mind thinking ‘Duh!’ i.e. when Jacob was pissed in his garage that Bella has decided to be a vampire. The mountain scene where Bella, Edward and Jacob were in a tent, hiding from the storm, Eric reminded me it was kinda similar to Brokeback Mountain!!! The fighting scenes were cool though. Overall, it felt kinda rush and the acting was not real enough for me. I’m speechless… after months of waiting and anticipation… I somehow jumped off the Twilight wagon already. I probably should stick to reading the books as I heard the actual stories are much, much better. Sigh! Lets hope Breaking Dawn would be more mesmerizing and a much better finale ;-)