Tekken is in the Cinemas!!

Finally, Tekken is coming to Malaysia shores early next month! We have been watching quite a number of movies on Street Fighter but none of Tekken. Well, lets hope it is a much better effort with cooler fighting scenes since it is famous for it’s King of Iron Fist Tournament :-) 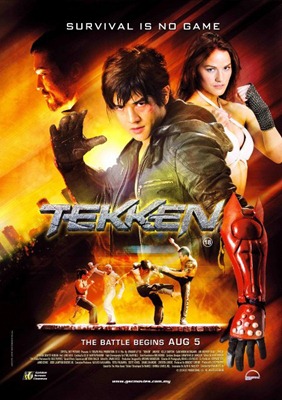 A synopsis of the movie:

The critically acclaimed Namco videogame franchise TEKKENTM is set to come to life on the big screen. Rising from the ashes of a crumbled civilization, gladiatorial combat has replaced warfare, and ruthless fighters pit themselves against one another in a bid for global supremacy. In the midst of the greatest tournament ever known, one warrior attempts to fulfill his destiny and become King of the Iron Fist.
Civilization as we know it has been destroyed and in it’s place a dystopian world order has arisen with seven all-powerful corporations controlling the planet. America is under the totalitarian leadership of the mighty Tekken Corporation and it’s CEO Heihachi Mishima (Cary-Hiroyuki Tagawa), who rules absolutely from the capital of Tekken City. Those outside the metropolis’s walls lead a life of fear and despair, fighting for survival as outcasts in a harsh world where resources are scarce. Rising from this poverty is Jin (Jon Foo), who is driven by nothing more than a desire to murder the man who killed his mother (Tamyln Tomita). In order to exact his revenge Jin must defeat the world’s most elite fighters and win the ‘Iron Fist’ Tournament. However this journey will show Jin a past that his mother had tried to hide from him and force him to realize a future that threatens to tear him apart.

I’m not sure if Ling Xiaoyu would be in this movie but she is a character I kinda like, well, for the obvious reason. Girl Power! LOL!

Ever since she was a little girl, Ling Xiaoyu (Chinese: 凌 曉雨 Pinyin: Líng Xiǎoyǔ, Japanese: リン・シャオユウ Rin Shaoyuu) loved amusement parks. Also she was tutored in martial arts by a relative, Wang Jinrei, from a young age. He believed that if she were more serious, she could achieve true greatness, but became frustrated by her careless attitude. While vacationing in Hong Kong with her family, she noticed a yacht bearing the name: “Mishima Zaibatsu”. Knowing that the Mishima Zaibatsu was rich and powerful, she decided to seek out Heihachi Mishima and make her dream a reality. Abandoning her family, Xiaoyu stowed away on the ship.

The ship’s security soon discovered her and informed Heihachi of her presence. By the time that Heihachi arrived on the scene, all of the Tekkenshu—Heihachi’s personal security force—that were aboard the ship had been beaten into unconsciousness and strewn about the deck. It looked as if the ship had been hit by a hurricane. Amidst the chaos, Heihachi found Xiaoyu. She threatened to beat him up if he did not accept her challenge. Amused by her juvenile antics, Heihachi roared with laughter and promised to build her theme park if she won his tournament. She enrolls at the Mishima Polytechnical School, and this is where she first meets both Jin Kazama and Miharu Hirano. Bringing along her old school's trained panda (aptly named "Panda"), Heihachi teaches her to fight, much like he had taught Kuma, so that Xiaoyu would have a bodyguard. This inspired Xiaoyu to see Heihachi as something of a grandfather toward her.

After the King of Iron Fist Tournament 3, Xiaoyu continued to live, study, and train as a ward of the Mishima Zaibatsu, but her life became boring and mundane, lacking any particular goals. Two years later, Xiaoyu was delivered an anonymous e-mail admonishing her not to trust Heihachi. The anonymous individual warned her that Heihachi posed an immediate danger to her life. At this time, Xiaoyu was a junior at the Mishima Polytechnical School and had become sick of her daily routines, but receiving this mysterious e-mail rejuvenated Xiaoyu’s passionate spirit.

Xiaoyu replied to the e-mail dozens of times. Although the sender never contacted her again, Xiaoyu became convinced that Jin, who had been missing since the previous Tekken tournament, had sent it to her. Around this same time, Heihachi announced the King of the Iron Fist Tournament 4. Hoping to reconnect with Jin and unmask the Mishima Zaibatsu’s evil deeds, Xiaoyu decided to enter the tournament.[15]

At the end of the previous tournament, Xiaoyu is rescued from the evil plans of Heihachi Mishima by Yoshimitsu, who then tells her about the tragic history of the Mishima family. Xiaoyu starts to believe that the root of all misfortune surrounding Jin and the Mishima family was Heihachi pitching Kazuya off the edge of a cliff when he was five years old. At this point, Xiaoyu believes it is her personal mission to save the tragic Mishima family. She wished that there were some way to turn back time and fix the past. Her prayers were answered when she heard an unnamed scientist boast that if he had the money, he could build a time machine. To obtain the money to fund the invention, Xiaoyu enters The King of the Iron Fist Tournament 5 to win the prize money.[15]

Ling Xiaoyu breathed a sigh of relief when she heard Heihachi had not truly died. However, as head of the Mishima Zaibatsu, Jin Kazama aims to take Heihachi’s life. Xiaoyu was going to try and stop Jin herself, but the Zaibatsu pushed towards militarization, making it difficult to approach Jin. The Mishima Zaibatsu’s declaration of war drew hostility from around the globe. When the King of Iron Fist Tournament 6 is announced, Ling Xiaoyu enters in the hope that she can save Jin’s soul from evil. Xiaoyu also has a crush on Jin due to their friendship when they were at School.

Ain’t she a handful? Leading quite a colourful yet powerful life! She’s attractive and yet a strong character, a joy to behold as noted by GameDaily. They even voted her as one of their favourite female Asian video game characters! I totally <3 Ling Xiaoyu!