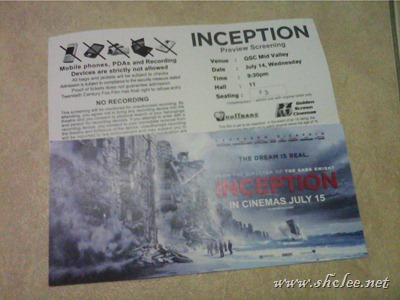 Dom Cobb (Leonardo DiCaprio) is a skilled thief, the absolute best in the dangerous art of extraction: stealing valuable secrets from deep within the subconscious during the dream state when the mind is at its most vulnerable. Cobb’s rare ability has made him a coveted player in this treacherous new world of corporate espionage, but it has also made him an international fugitive and cost him everything he has ever loved. Now Cobb is being offered a chance at redemption. One last job could give him his life back but only if he can accomplish the impossible—inception. Instead of the perfect heist, Cobb and his team of specialists have to pull off the reverse; their task is not to steal an idea but to plant one. If they succeed, it could be the perfect crime.

But no amount of careful planning or expertise can prepare the team for the dangerous enemy that seems to predict their every move. An enemy that only Cobb could have seen coming.

Thanks to Nuffnang, I watched the Premier Screening of Inception last Wednesday, a day before it has been released! Hubby had to work though so Eric was kind to accompany me.

It was an intense, mind boggling and engaging movie… totally kept me on my toes :p A totally creative and unique storyline which actually had me thinking of a lot of things! Some parts were way over though i.e. we can share dreams and the slow motion of the van falling into the river but what the heck! It’s a creative movie! The ending was weird for me as it left us pondering whether Dom Cobb survived. One thing we learnt from this movie is that our mind is volatile and can be easily changed or influenced especially when someone has planted a notion in our sub-conscious mind. Hmmm…

I have never liked Leonardo, all thanks to his portrayal as Jack in Titanic :p Thankfully, his portrayal as Dom Cobb was good, he has now re-projected himself, in my mind, as a versatile actor.

Many said that this movie is good. Too bad, I am going to head back to Melbourne soon. :( Watching movies in Melbourne is so much pricier and not that worth it. SO I would have to wait for the DVD.