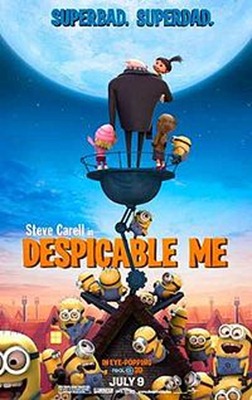 Gru is a villain, hoping to be the greatest villain in the world! His latest project is to steal the moon by shrinking it. While trying to obtain a loan for this project, he met with another villain, Vector, who had just stolen the pyramid! Since then, he met with a lot of roadblocks because of Vector, especially losing the shrinking machine to him. Gru suddenly had an idea (which he called ‘light bulb’ moment) by adopting 3 homeless girls to help him steal back the shrinking machine. The path to the moon was then filled with many obstacles after adopting them!

Finally able to watch this movie with Hubby! Most cinemas are showing it in 3D but we wanted to watch the normal version :-) Anyway, a heart-warming comedy with a predictable storyline. A funny cartoon which will definitely lighten up your day! A lesson to be learned here, never ever underestimate your children. I mean we must always encouraged them even though they are not up to standards and we shouldn’t look down on them. I guess Gru wouldn’t have been a hopeless villain if his mother encouraged him better :-) I love the homeless girls, they are so adorable!