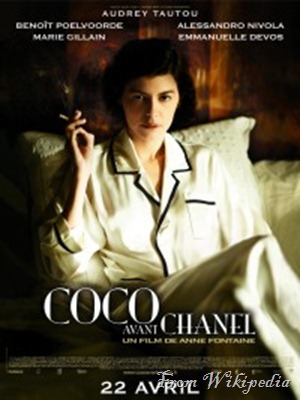 Gabrielle Chanel and her sister were abandoned at an orphanage when they were young by their father. As they grow older, they work as seamstresses during the day and sing in a bar during the night. Gabrielle met Balsan who nicknamed her Coco, after the song she used to sing with her sister in the bar. After her sister left for Paris to be with her future husband, Gabrielle felt lonely and decided to go to Paris to look for Balsan. She became Balsan’s mistress and was shown the lives of Paris’ high society. She kept making clothes and hats for herself, since she couldn’t afford to buy and the trend then was atrocious in her books. Balsan’s lady friends began to notice her skills and started asking her to make hats for them. She soon met Boy Capel and fell in love with him. He helped jumpstarted her fashion empire which is still going strong until today.

I have always been a sucker for biography type of drama, especially when it involves women of substances :-) How can I resists this movie even though it’s in French? Thank goodness for subtitles ;-) ! Anyway, Coco Avant Chanel or Coco Before Chanel is about the early life of an icon who had defied the conventional and defined the modern women :p Coco Chanel never married and has never stopped working until the day she died in 1971. She was an astounding woman, such a strong character. In fact, I never knew she was from a poor background (or she smoked to glory which is not healthy)… like a fairytale, from rags to riches but with a twist. I was so immersed into the movie (no wonder it won so many accolades); it was beautifully told with nice settings and stunning costume design. Audrey Tautou did a great job in portraying Coco.