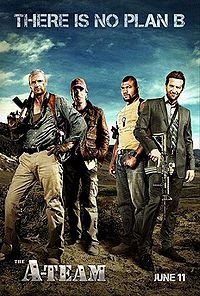 The A-Team is a 2010 action film based on the television series of the same name. They are an elite army team which has been imprisoned for a crime they did not commit. They escape and set out to clear their name. (Extracted from Wikipedia)

Honestly, I prefer the original casts from the TV series, probably because I’ve seen their faces all my life! They looked more at ease and natural with the characters as opposed to the movie casts. The movie casts somehow lacked of something… not sure what it is though. Anyway, the movie plot is as hilarious and enjoyable :-)