Prince of Persia: The Sands of Time

Watched this movie with my colleagues last Wednesday but I missed the first 10 mins! WTF! All thanks to our favourite Malaysian past time… TRAFFIC JAMS! We took 1 hour to reach Mid Valley from PJ; which normally takes about 15 mins only :-( 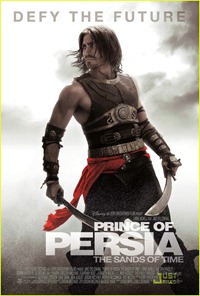 This epic action adventure, based on a computer game, sets in the mystical land of Persia. Prince Dastan was helping his brother to find weapons in a sacred city in Persia. Here he met Princess Tamina, the keeper of this sacred city. However things turned out differently from what was planned or expected once Dastan was accused of killing his father. He has also found a mystical dagger; which actually belonged to Tamina and it has a secret power which he discovered later on. Tamina helped Dastan to escape the city, hoping to steal the dagger back and returned it to it’s hiding place. However things didn’t go as planned and the adventure begins.

I have always remembered Jake Gyllenhaal as the other gay half in Brokeback Mountain :p However, he was so dashingly handsome as Prince Dastan ;-) I was drooling with awe… gaping at his flexibility in jumping and running around in the movie… drooling sigh! I have not seen Gemma Arterton before… she’s totally cool and sexy as Princess Tamina. I was totally on my toes watching the movie… full of action and excitement albeit some illogical scenes (Well, it’s just a movie! A make believe one too!). Totally worth it to watch in the cinema with all the sound effects. I definitely don’t mind watching it again since I missed the starting :-)