Thanks to Niki Cheong’s tweet, I participated in the Toy Story contest recently. It was pretty easy, I just need to name who should be the voice of Woody and Buzz Lightyear and why (My guess was Zachary Levi as Woody and Dwayne Johnson as Buzz!) I was pleasantly surprised when I received an email from Sharmila of the R.AGE stating that I have won a pair of tickets to watch Toy Story 1 & 2 in 3D!!! 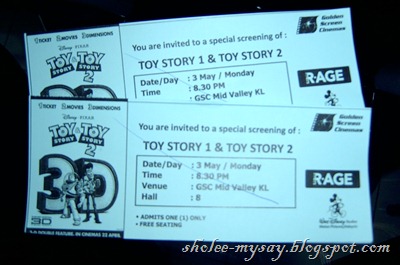 Woody is the leader of a pack of toys belonging to Andy. He is also Andy’s favourite toy. When Andy celebrated his birthday, he received a new toy from his mother, a spaceman named Buzz Lightyear. Woody felt his position threaten as Andy’s favourite toy with the emergence of Buzz. He begins to find ways to get rid of Buzz. However, accidents happen and it leads to the beginning of a wonderful friendship.

I kinda enjoyed the movies as it was kinda funny and kinda emotional ;-) Some parts may be boring a little but overall entertaining, especially for children. As for the 3D, I don’t see much difference between a normal Toy Story movie and 3D version. Reason being, before the movie started, they previewed a new movie trailer ‘The Legend of the Guardians’ in 3D. I was totally taken aback and in awe by the beautiful owls in the trailer. 3D for this movie is really cool and awesome! My expectation then was really high for Toy Story in 3D. So when the movie started, I was like… errr… where’s the 3D? Get my drift?