My angels didn’t want to watch this movie when it started. All because of the posters around the cinema… dark and scary looking! 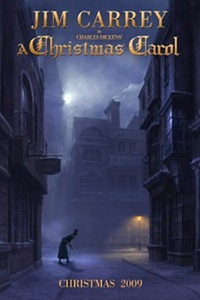 See what I mean…

Based on a book by Charles Dickens… Ebenezer Scrooge was an old, kedekut and miserable man. He also hated Christmas! He felt it was a waste of money to celebrate Christmas and disliked spending time with family and friends. One night, he started having weird dreams… some Christmas ghosts visited him, hoping that he will change to be a better man!

Honestly, I have watched Barbie: A Christmas Carol first so this movie is a total replica except for the sexes :p I mean Barbie’s was a female named Eden and Ebenezer was a male. Barbie’s version is also lighter, sweeter and nice with lots of musicals. This movie version is much darker and scarier. All in all, the storyline is the same since it’s based on a book by Charles Dickens and I believe the male version is the original one (I have not read the book before). Both characters hated Christmas and very kedekut ;-) Both movies have it’s own individual ways to deliver the story which was meaningful, with the original ending in mind. I actually enjoyed both versions :-)