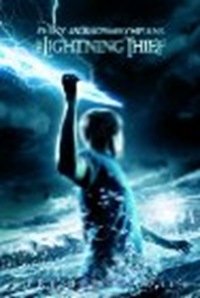 Excerpt from Wikipedia:
It's the 21st century, but the gods of Mount Olympus and assorted monsters have walked out of the pages of high school student Percy Jackson's Greek mythology texts and into his life. And they're not happy: Zeus' lightning bolt has been stolen, and Percy is the prime suspect. Even more troubling is the sudden disappearance of Percy's mother. As Percy adapts to his newly discovered status as a demi-god (his father is Poseidon), he finds himself caught between the battling titans of Mt. Olympus. He and his friends embark on a cross-country adventure to catch the true lightning thief, save Percy's mom, and unravel a mystery more powerful than the gods themselves. Follows the Greek god Poseidon's 12-year-old half-human son as he embarks on a fantastical quest across modern-day America to save his mother, return Zeus' stolen lightning bolt and prevent a deadly war between the gods.
Hmmm… in summary, Percy discovers he is actually half-human, half-God, his father is Poseidon and he has to hide at a special school for demi-Gods. He was accused of stealing Zeus’ lightning so he has to hide and find a way to clear his name. His mother was also captured by Hades and he has to find a way to save his mother as Hades thought he has the lightning.
A movie similar to Clash of the Titans, the difference is this is about Poseidon’s son and not Zeus’. This is also set in modern day, Percy being a normal high school geek. It’s more of a light adventure drama with a simple story line, not as grand and dramatic as Titans.
7 thumbs up out of 10
Email ThisBlogThis!Share to TwitterShare to FacebookShare to Pinterest
Sections: Movies