I’m an introvert, not athletic nor sporty. I have tried volleyball, bowling and squash during schooling days but neither has kept me interested for long. As I grow older, I procrastinate often, working and lepaking occupied most of my time :p

After I met Hubby (then boyfriend lah), he got me interested in snooker. Yes, of all thing, snooker! Believe it or not, I actually find it to be challenging, interesting and fun! I enjoyed it so much that I became Hubby’s sparring partner, frequenting snooker centres almost every night! It became a norm place for us to ‘phak thor’ :p It never tires me or my brain and I find it exhilarating whenever I’m playing snooker. Back then (as though I’m very old :p), there weren’t many female snooker players. So I played mostly with Hubby’s friends. I’m not 100% sharp or skilled but I enjoyed the challenge. I do know some friends who disliked snooker as the ‘field’ is huge! Hitting a small ball from one end of the field to the other end! Boring they say! LOL!

Somewhere in the late 90’s, we started transitioning into pool. It was the rage then… American pool, British pool and 9 ball, you name it, I’ve tried it! I totally enjoyed it as the table was smaller and the holes bigger! So much easier to clear the table or ‘sau kiu’ in Cantonese ;-) 1st July 1998 was a memorable day (or shall I say night) for me as I won the Sunway American Pool Club - Ladies Pool Competition! 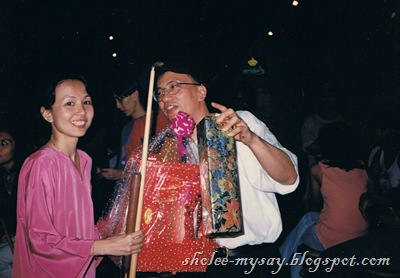 My memorable moment (I was there after work which explained the Baju Kedah :p)

Both snooker and pool are a tough sport too, you may think the players do not perspire since they are playing in air-conditioned venues but they actually do… especially under duress or stress while playing. Furthermore, most snooker and pool centres in KL are smoking zones with poor ventilations; stale ciggie’s smell would be our perfume at the end of the night. That’s how I felt each time when I reached home, smelling of stale ciggie’s and feeling sticky all over. 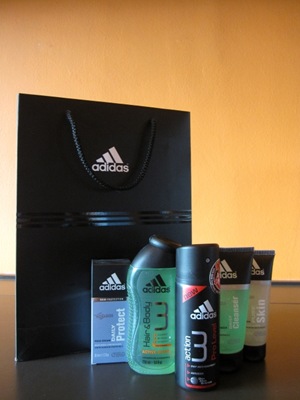 Thank goodness we have Adidas, a well known toiletries brand. It keeps us smelling fresh, clean, without the sticky feeling. It also protects our skin from unwanted bacteria which could easily be transmitted through air, especially at venues with poor ventilations. With Influenza A(H1N1) still lurking around the corner, we must stay fresh and clean all the time. I know, I know, OT a little here *grinning*

I have retired from snooker and pool since I first discovered I was pregnant with my first child in 2001. I still do play on and off for the fun of it but not religiously like I used to. At times I do reminisced it as I could be semi-pro, representing Malaysia, etc. like some of my girlfriends do. Well, it’s a choice I have made so No Regrets!!!