Clash of the Titans

Hubby wanted to watch the Titans so I accompanied him last Friday since he had accompanied me with the Dragon ;-) 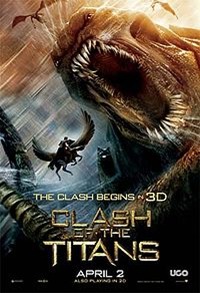 Perseus is a demi-God, son of Zeus although he doesn’t know about it. He was adopted by a fisherman who found him in a coffin in the middle of the ocean, in the arms of his dead mother. When he was older, his step-parents and step-sister were killed by Hades, Zeus’ brother. As the Gods were angry with the people for not worshipping them, Hades took advantage of the situation and pretended to help Zeus by releasing the Kraken when the time comes to scare the people. Perseus’ adventure begins when he takes it in his stride to stop the Kraken, to save the people and also take revenge against Hades.

Honestly, I prefer the new version’s storyline and graphic, which are much better, more exciting and logical. The fighting scenes were kinda gore but well crafted. The old one actually made me feel sleepy and looks funny, probably due to the old fashioned filming ;-)