Last Tuesday, I attended the premiere of Valentine’s Day with hubby at Cathay Cineplex e@curve, thanks to Nuffnang ;-) Another rainy night, left immediately after work so that we will not be late. The traffic jam was horrendous, took us nearly 1 1/2 hours from PJ State to e@curve, geez! I do hope that the next round of premieres would be somewhere in PJ i.e. Tropicana Mall or Sunway Pyramid :p 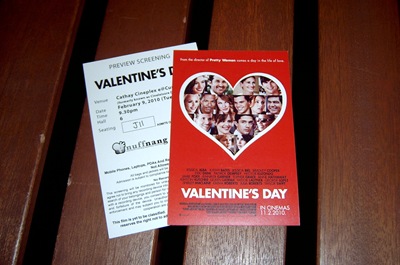 It’s about the events that happen to a group of people in one particular day . In this instance on Valentine’s Day “A day in the life of love”.

Reed intend to propose to Morley. Both Kara and Kelvin hated Valentine’s Day. Julia has finally found the man she loved in Dr. Harrison. Jason and Liz decided to commit to each other. Holden and Kate met on the airplane. Willy and Felicia were madly in love. Alex and Grace were planning to have sex. Oops! I’ve said enough! You should watch the movie to know the rest ;-)

I’m a hopeless romantic thus I’m totally smitten by this movie. It’s funny yet meaningful. Garry Marshall has done a great job with this movie, streamlining it with ease, connecting all the characters well.

I heard that taylor swift was sort of snubbed for this movie.