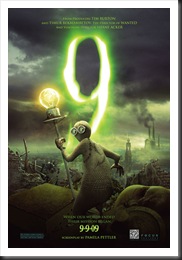 I’ve not heard of this movie before thus a bit sceptical. I don’t remember it being shown in the cinema here hence adding to the doubt. It’s one of the DVD’s my hubby bought, an animated fantasy movie and the lead voice was Elijah Wood!

Earth is deserted except for a few little mechanical humanoids, called the stitchpunks. They had survived the terrible war, between humans and robots, that had lead to the doom of mankind. The stitchpunks lived in fear as there is a huge robot hunting for them, sucking their souls if caught. The last stitchpunk named 9 (Elijah Wood) has just awoken and this is when the adventure begins.

Honestly, the starting was slow a bit but it picked up the pace soon after. It’s a very meaningful movie with nice animation, comparing with other doomsday kind of movie, this is really worth watching.