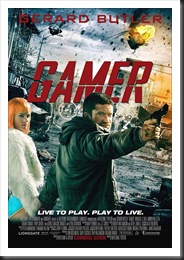 This movie is full of gore! Luckily I watched DVD thus I can easily skipped the gore part ;-) So full of violence, more of a guy flick.

Gamer is a movie about a new game technology where a human can control another human’s mind to play via online. It was created by a billionaire named Castle. There are 2 types of game i.e. Society and Slayer. Slayer is the latest rage as it’s a shooting game and the ‘avatars’ used are all prison inmates. The famous avatar is Kabel who is controlled by Simon, a young gamer who has been guiding Kabel to victory each week. Kabel has been wrongly imprisoned and forced to fight against his will, hoping to be released soon to be with his wife and daughter.

To me, the storyline is similar to most action movie, a man wrongly accused and family either dead or trying to start anew. Those who enjoys gory stuffs and fights will definitely like this movie, not for me though…