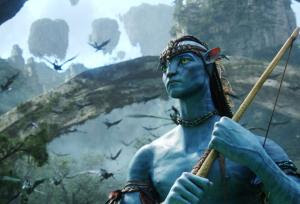 When I first saw the trailer, I was in awe over the beautiful animations. I really thought it was a cartoon. Little did I know it was actually both cartoon combined with reality. I wanted to watch it in 3D as it was highly recommended but we were with our kids so better not, in case of nausea and headaches.

The movie is about an ex-navy, Jack Sully, who was paralyzed from the waist down, who agreed to take over his dead twin brother’s place, a scientist, as both their DNAs were identical and can linked up with the Avatar created with his dead brother’s DNA. His adventure began when he reached the planet where the Avatar expedition took place. In the alien planet, both the army and scientists were trying in vain to make contact with the locals, called the Navi people. The scientists were trying to study the planet’s unique being and to get some specimens from a holy tree which the locals called Eywa. Whereas the army was trying to get rid of the locals, hoping to dig into their soil which was rich with a very important and valuable mineral.

In summary, this movie is actually teaching us the importance of mother nature, how we should be treating her and value her, not destroying her for our own greed i.e. killing the trees, the corals, the endangered species, etc.

On the other hand, James Cameron has lived up to his high standard and unique quality, the animations were so damn beautiful, the movie damn meaningful. Even though it was lengthy, my kids enjoyed it so much, for the whole 3 hours! A wonderful movie to wrap up 2009! This movie is really worth watching and DVD worth keeping ;-)

10 thumbs up out of 10!
Email ThisBlogThis!Share to TwitterShare to FacebookShare to Pinterest
Sections: Movies

this is a fantastic movie and for the whole length of the film I really thought that the aliens are REAL! the scenery was beautiful especially the floating mountains ;) simply magnificent visuals and great storyline, I definitely going to watch it again ;)

totally agree! you watched it in 3D or normal?