Yesterday, we brought our kids to the cinema to watch Astro Boy. The poster looked cute and my kids didn't want to watch Christmas Carol because it looked scary. Geez! Honestly, it was a really nice and entertaining movie. Even the animation looks superb! 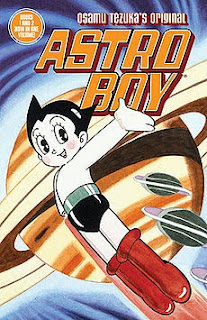 It's about a genius boy who was too curious, wanting to know about a new project his scientist dad was about to launch for the president. He managed to sneak into the lab to preview the launch but it had gone wrong. He was trapped on the wrong side of the lab and vanished when they tried to stop the disaster from getting worst. The distraught dad decided to replicate his son, using the DNA from his missing son's hair, and Astro Boy was born.

Why hadn't the blast spitted out the son then?

Hmmm... probably I was too tired and confused. Anyway, great movie to watch with your kids!
Rating: 8 thumbs up out of 10
Email ThisBlogThis!Share to TwitterShare to FacebookShare to Pinterest
Sections: Movies

hmm Im not a fan of astroboy, not much action ;) I really do recommend you watch Avatar next week. Its going to be worth it. ;)

Oh yes... I do intend to watch Avatar... the animations are really cool!