Recently, my son had participated in the “Cartoon Network’s BEN 10 Alien Swarm Big Screen Invasion” contest organized by AstroLife and Cartoon Network. It was a straightforward online contest where he had to answer 3 questions correctly and nominate the alien which he likes best and why. I received a call last Monday from Astro that my son had won a Runner-up Prize. I've also pasted the e-mail notification from Astro:

Thank you for your participating in the recent “Cartoon Network’s BEN 10 Alien Swarm Big Screen Invasion” contest organized by AstroLife and Cartoon Network.

We are pleased to inform you that you have won the Runner-up Prize consisting of:
* Four (4) BEN 10 Alien Swarm Green Carpet Premiere Tickets*
* One (1) BEN 10 goody bag** 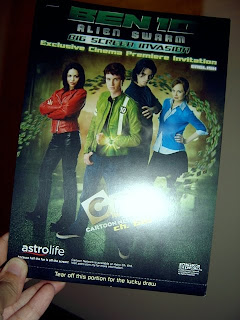 The day arrived and we were early. 1 of the posters at the entrance: 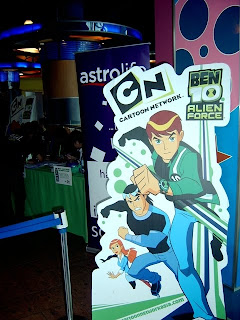 We were 1 of the early birds to get our seat numbers, placed the ticket stubs for lucky draw and collected the goody bags: 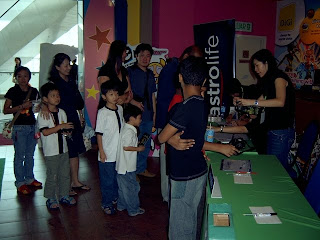 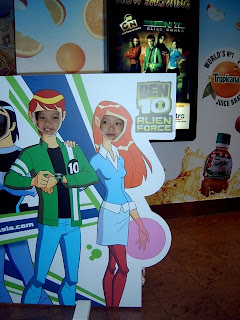 As we were early, we got to play the 3 games available with ease: 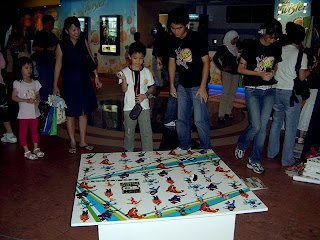 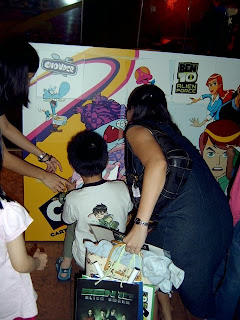 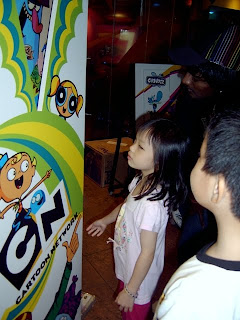 The crowd thickened as the hour progressed, all anxiously waiting to meet Ben and Gwen in person: 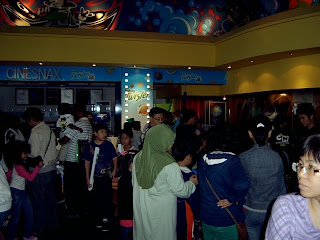 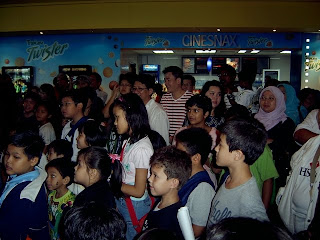 Finally after waiting for about an hour, the host, Kevin, kick-started the event by having some quiz's and then voiceover of Ben in Malay version, Hafiz of Akademi Fantasia, on stage. There were 2 rounds of picture taking with Hafiz (limited time hence only 2 rounds were permitted): 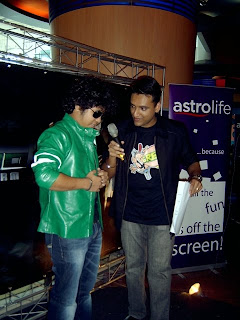 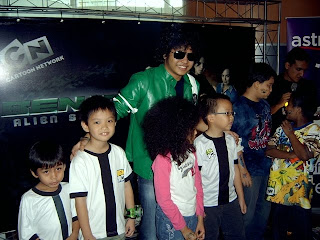 They also had a 'Best Dressed as Ben' Contest and 1 of the criteria to participate was to wear the Omnitrix. It was judged by Hafiz and Jason of Astro. And the winner is... drumroll... Richard! First runner-up... my son!!! And second runner-up... Kevin! 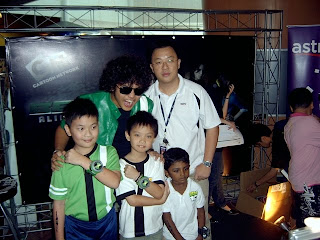 At last, Ben and Gwen arrived (in puppet-form???) and the Best Dressed winners got to take pics with them: 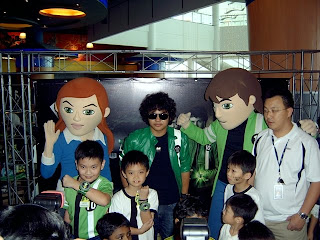 The Grand Prize Winner of the contest (sorry I can't remember her name)... congrats! 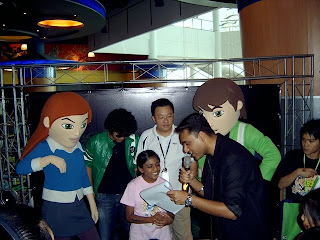 The anxious people waiting for their numbers to be called during the lucky draw: 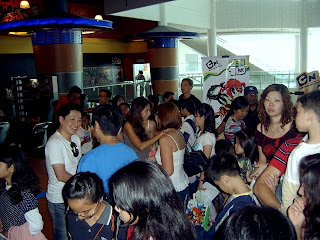 The anxious people waiting to go into the cinema: 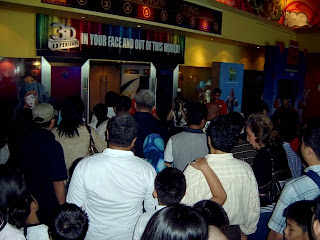 Summary:
The overall event was quite fun except for the few inconsiderate people who sort off spoiled the fun
1) The photographers - they were busy taking pics right in front, asking us politely to move away including the children, who then can't get to see their favorite super heroes as these photographers had blocked them.
2) The inconsiderate parents - some parents were so 'kia su' they practically pushed their kids to the front when there were some chances to go on stage. They didn't bothered about other kids there and just shove their way through. My girl got scraped on her face by a woman's handbag and this woman didn't even apologized... just stated the obvious 'My handbag ah?' and then continued to push forward.
3) Still the inconsiderate parents - when it's time to go into the cinema, we actually didn't need to walk, we practically glided through as we were shoved from behind. We were given seat numbers so I still can't figure out why the need to rush into the cinema... hmmm...

Anyway, when we reached home only did we realized the goody bag content was not given as mentioned in the email earlier. We only had the bag, poster and postcards. I wonder what happened to the rest of the items. Really need to check with Astro on this.

To cap the event on a lighter and nicer note, pic of my kids with their prizes :-) 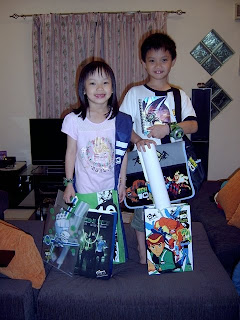 Thank you Astro and Cartoon Network. You have made my kid's day! A good start for their school holidays ;-)
Email ThisBlogThis!Share to TwitterShare to FacebookShare to Pinterest
Sections: Contests, Movies

I entered this contest too but did'nt get it (sigh) :(